So I got sucked in again... Swaps do it to me EACH and every time... :) But it's honestly been a long time since I really was involved in swaps via Cafe Mom, so when I saw a couple of interesting swaps on Splitcoast, I had to join in...
These ATCs were created for a Steampunk swap that was DEFINITELY up my alley, particularly since I haven't played with my entire pack of Steampunk Debutante paper from Graphic 45, and it's probably still my favorite line they've released recently... So here's the whole lot of nine:

And here are a few of the cards individually:

I had lots of fun making 'em... I used some corrugated cardboard (my alltime favorite backing for ATCs, btw!) and added some light gel medium mixed with Paprika Glimmer Glam that I then dripped on top of the coppery blend... Then I layered my favorite Graphic 45 papers, inked em up, added a stamped Tim Holtz Millinery image that I colored in with my Smooch ink and then of course there's some lace, some Tim Holtz sprockets, and CRACKLE accents (without which no project is ever complete!)... Oh AND I played with the Viva Decor Bronze pearl pens for the pearl accents...
﻿
Posted by MommyScraps at 11:07 PM No comments:

"He talked of foregrounds, distances, and second distances — side–screens and perspectives — lights and shades.” (Northanger Abbey)

And it is lights and shades that I too am working on! :) I'm still trying to figure out exactly where the darker shadows should go on a complex image and how to add the light element to said picture... A fun image to work with for shadows was this Cinderella stamp from Kraftin Kimmie.

And I was able to find the lil gold shoe in my stash to add with the gold stickles and gold paper matting to qualify for this week's Kraftin Kimmie's challenge: gold. :) These images have so much depth to play with so I'm thinking I'm going to have to dig 'em out more and more! :)
Posted by MommyScraps at 8:53 AM 1 comment:

Hey there blogland! Just a quickie post cause we're in the middle of final exams (thankfully!) and cleaning up and all that good stuff... I'm SO looking forward to the summer months so I can get crafty! But in the meantime, I may have mentioned my darling Leah was around this weekend... Check out HER blog cause I'm sure she's showin' off her FOURTEEN cards... BUT I did get to make THREE measly ones while she visited! :) 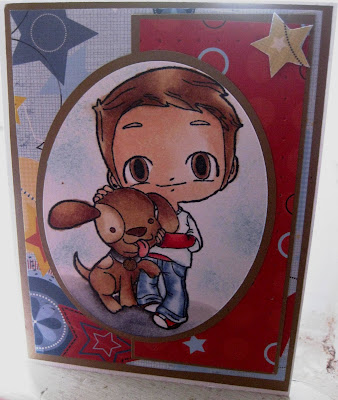 THIS one was made using Toby from Some Odd Girl... And since the "manly" challenge is up tonight, I thought I'd squeeze him in there before it expired! :) ALSO, I stumbled across this lil blog called Card Cupids... WELL, their mission is to provide some love to lil' kids who are suffering, via handmade cards, stuffed animals, and the like... Since I've been teaching my students to make cards for troops, I think we're going to add Card Cupids to our list for next year and send some love out to little ones as well... This one is being submitted there cause of Toby's li'l doggie, and I'm DEFINITELY making something with butterflies on it for their newest call for happy mail... And I think I'll enlist Mini Me Melanie to help out too! :)
Posted by MommyScraps at 9:36 PM 2 comments:

"Nobody minds having what is too good for them." (Mansfield Park)

And it was TOO good to see my darling friend Ms. Leah yesterday for our all day cropping adventure... Leah got her cardmaking mojo rolling and made a whoppinig fourteen cards to my THREE... :) BUT in my defense I was also working on some layouts for Scrap-A-Doodle Doo's use at the upcoming CKC. 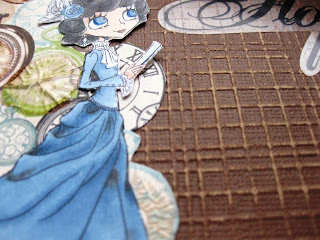 This card was made using the Lil Victorian Steampunk Lolita Evie from Tickled Pink... This week's challenge was to incorporate texture, and my darling Leah hooked me up with some GAWJUSS Core'dinations paper that I sanded down to show the fabby texture underneath... paired with crackle accents on some of the clocks (yes Jill, I'm still a crackle accents addict!), and a couple of little embellies, this one was SO much fun to make... Did I mention how much I'm lovin this lil lady?? :) 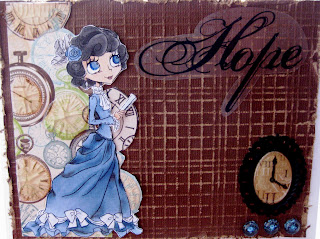 Posted by MommyScraps at 3:10 PM 4 comments:

"Woman is fine for her own satisfaction alone. No man will admire her the more, no woman will like her the better for it. Neatness and fashion are enough for the former, and a something of shabbiness or impropriety will be most endearing to the latter." (Northanger Abbey)

SO... I was ogling the new Victorian Steampunk beauties released by Tickled Pink recently and poof, up popped an announcement that Kellie was giving away some freebies to the first fifty respondants... I SO didn't think I would've made the cut off, but then Kellie updated the blog and mentioned there were still some spots! SO... whoo hoo, I was blessed with a Lil Victorian Lolita Evie! :)

Here she is in all her shabby chic splendour, fully colored in copics (oooh ooh, did I mention that I JUST got copic certified this week in Philadelphia? The two hour ride was SO worth the pretty certificate and all the awesome techniques I learned from Lori Craig!!! BUT that's a whole other post in and of itself! :)

For this card, I used the Super Sketchy Sunday design from 365 Cards, and the Tickled Pink challenge is Anything Goes (as long as you use an image from them!). Paper Sundaes also asked for Sentiments along with or without images...This sentiment came from Paulette over at TLC, and totally fit this Victorian fashionista!

Here's a quick card made using the Bo Bunny Gabrielle line... I LOVE making accordian flowers now (now that I know how to that is! :) ) And this one is a clean and simple card using some of the VERY cool Glimmer Mists I was lucky enough to win on Facebook, which made this card lots of fun to make... I'm submitting it for the Creative Card Crew's Wings Challenge, Charisma's Something that Flies Challenge, and the Bo Bunny Flowers Card Challenge. 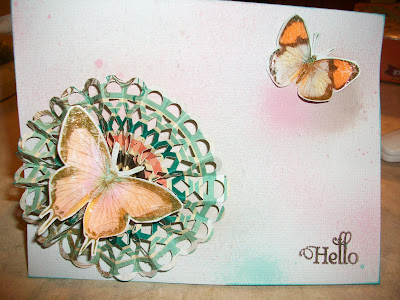 I'll be back later on tonight with a card I'm working on using an ADORABLE Tickled Pink stamp... We have NO SCHOOL tomorrow cause of the heat advisory, so I'm WAY excited... :) Pool n sun tomorrow! :)
Posted by MommyScraps at 7:16 PM 1 comment: 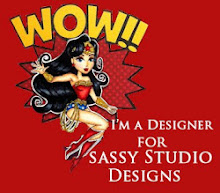 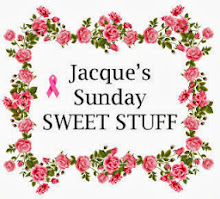 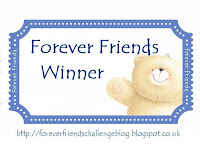 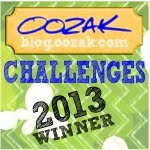 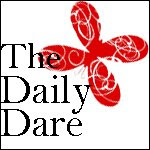